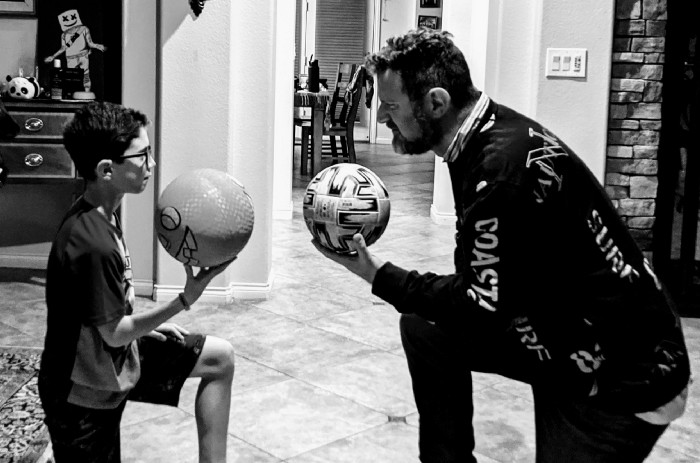 The documentary, about the need to change the culture of youth sports by bringing the focus back on the kids, will feature interviews with experts from a range of fields, including kids, athletes, coaches, physiotherapists, doctors, and psychologists. These experts will offer their insights on the importance of youth sports and the ways in which they can benefit children.

The film will explore the negative impact of the hyper-competitive youth sports culture that has taken over. This system has put winning ahead of good sportsmanship. It has forgotten who we are doing this for and the very real and traumatic toll it’s taking on children, their families, and communities. By helping to begin the dialogue and in working together as a community – coaches, parents and kids – we can create an environment where our athletes can thrive.

Kids are overwhelmed by the pressure of pleasing their parents or performing for their coaches. Too often they stop playing for themselves.

The testimonies collected will discuss the importance of a coach as teacher, an educator and how important and influential they can be in the career and life of an athlete and the sports enthusiast.

The film will showcase how, all too often, kids are disregarded completely if they are not tall enough, fast enough, or strong enough. How many kids are we leaving behind because we forget we are supposed to help all children at every level with both physical and mental fitness, not simply promote a certain few.

Children who are pushed to the limits and under incredible pressure to perform, ending up injuring themselves at alarming rates and out of sports by age 13, when over 70% of kids leave all competitions.

So many children’s lives have been upended during this past two years due to Covid-19. Many kids we spoke with have told us they loved the quiet of the weeks with no practice and no games. They loved not having to get up early on a Saturday for a game that is 45 minutes away and having to endure the ride to and from the game (or practice) with mom and dad.

Children right now prefer to play videogames than play a sport they love. Kids who love soccer, and basically sleep with a ball, often refuse to even kick the ball for months during the lockdown. We often hear “I just need a break, I just can’t,” Many are in a desperate need of a break

Our mission is to expand the conversation and spotlight progress and potential solutions. One player/family at the time. One team. One club. From the bottom up. We want to affect change through honest dialogue and having a better understanding about how everyone works together.

These are societal changes that can only take place with meaningful discussion about what is happening within their communities.

Former pitchers John Smoltz and Tom Glavine, former OF Shawn Greene, Assistant GM Cleveland Guardians, Doug Carpenter; we have also spoken with Coach legend Anson Dorrance of the UNC Chapel Hill Women Soccer Team and Coach Tom Byer, and Coach Reed Maltbie are some of the people we have been blessed to talk to. The American College of Sports Medicine (ACSM) as well as National Youth Sports Health and Safety Institute (NYSHSI) are also supporting our project.

More Than a Film Project

In order for the organization to support the well-being and respect for the development of children practicing sports, we intend to create and offer services through its members covering:

Now more than ever, it is important to have a communication network in place that allows those who manage the movement to easily communicate with one another. This network can help simplify relations between Countries (USA, UK, Italy) and representatives of the Ministry of Sport, the Olympic Committee, the Ministry of Education, the order of physical education teachers, the technical-scientific associations of coaches and sport scientists.

The aim is to simplify relations between the State and Federations and Individual teams, providing them with the possibility of updating, growth and at the same time controlling the quality of their work to focus on the children.

The purpose is twofold: it will provide a space for exchanging information and experiences between different entities in order to improve their work; it will help to ensure that standards are met throughout the world, thus protecting children’s development.

The organization wants to be a meeting point for all the figures who work in the field and the members of the organization are their representatives and referents.

It all starts with knowing who we are doing sports for:

Michael, a 12-year-old from New Jersey, said to me this summer, “I love baseball, I love everything about it. Derek Jeter was my favorite player and wish I could be him!” The follow up broke my heart. “Will you go back to playing after Covid ends?” and without even letting me finish my question, he said to me “Never. I don’t want to deal with lunatic coaches anymore. I never want to play again!”

Julian, 11-year-old kid, broke his wrist during an indoor game playing goalie as a favor to his coach. Upon hearing of Julian’s wrist, the coach told him “you are no longer going to be playing for us for a while, you are on the bench.” When asked to clarify, the coach finished with “you are hurt now, so we don’t need you”.

Jack, 7 years old stopped playing sports altogether, when a coach said to him “you are pathetic, you suck, and you shouldn’t be here.”

Lorelei, 10 years old, the only player to volunteer to shoot a penalty kick for her team, turned down by her coach with “not a chance, you won’t kick.” She left the team a few weeks later and stopped playing soccer for over a year.

Peanut, 8 years old, asked if she will be playing goalie. I asked her, “sure if that’s where you want to play.” She begins to cry and says to me “I never want to play goalie again, but my old coach told me I could only play goalie because I am too fat and slow!”